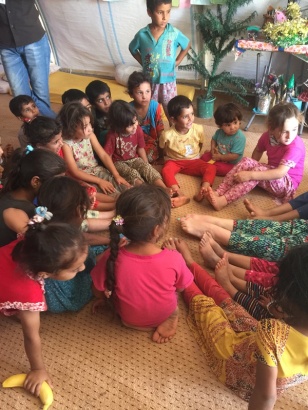 The NGO was already running child friendly spaces (CFS) in partnership with UNICEF in camps for refugees and IDPs, but these catered only for children aged 6 and over, and they recognised a gap in support and activities for younger children. The NGO had a background in working on child protection issues in Kurdistan.

In each location, the LFS was open for three 1.5-hour sessions per day, each run by a team of staff and volunteers.

Activities were planned on two-weekly schedules and included a mixture of creative, imaginative, physical, communicative and manipulative types of play. 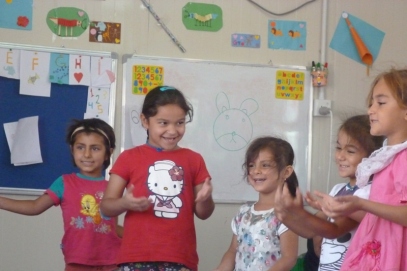 Psychosocial support activities were also deliberately included, focusing on issues identified among the children by the LFS team. In the IDP camp there were sessions focused specifically on friendship to encourage positive interaction between children from different backgrounds, and a session around hope and dealing with sadness after the team noticed that children were struggling.

All staff were trained in child protection and recognising children in need of further support, and in practice the LFS team were making two or three referrals to their child protection unit every week.

Children’s psychosocial well-being improved as a result of attending the LFS. Parents describe how children were initially finding it difficult to deal with their experiences, often becoming withdrawn and isolated, but that regularly attending the LFS has enabled them to socialise and interact with others again in a safe environment, helping them to recover a sense of normality and an ability to cope with life:

“Before, my son just stayed in and watched TV and he wasn’t talking to anyone. Now he has different activities and interests – playing outside, colouring in, learning the alphabet…”

“After they have been to the LFS the children are calmer and more settled and there is less fighting.”

In a context where ethnic divisions and conflict were a significant factor, it was important that the LFS trained and employed local staff and volunteers from each of the different communities accessing the LFS.